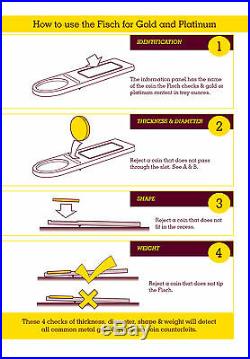 The Fisch – Detects fake gold coins – YouTube. Video will open in a new window. Get the Fisch Fake Coin Detector. The Fisch protects you. The Fisch Fake Coin Identification Gauge is an easy to use, precision made instrument that offers investors protection against fake gold coins. It has been used by major banks, bullion dealers and investors in over 60 countries around the world since 1980. This Wallet has 5 Fisch gauges for the Krugerrand/American Eagle 1oz, 1/2oz, 1/4oz and 1/10th oz as well as the British Sovereign. Fisch Fake Coin Detector for Gold Maple Leaf Coins. Fisch Fake Coin Detector for the Gold Krugerrand. Fisch Fake Coin Detector for Silver Coins. The Ringer by Fisch – Fake Gold, Platinum and Silver Detector. Use The Ringer with the Fisch to Detect Tungsten Counterfeits. Here’s what investors who have bought the Fisch say. I bought the entire set of Fisch tools about a bit over a year ago. I checked a 100 Corona coin today and it was fake, too large around, too thick, and not heavy enough. Your product saved me a fortune. My Fisch wallets have already prevented me from purchasing 3 counterfeit Mexican 50 Peso coins The coins were the exact correct weight but were slightly too thick and slightly too large in diameter. I have also found many British Sovereigns which checked oversize or too light. Many were from supposedly reputable dealers. I want to compliment you on the service and on the Fisch. I received my order on Monday afternoon and the timing couldn’t have been better. I got a counterfeit Maple the other day. Only passed the shape test. Made my job easy. All of the coins passed the weight test. I also rejected one coin for being oversize and a strange color. The coin dealer replaced the nine coins with no problem at all. In closing Ken, i would like to say thank you for a brilliant invention. Here is what you get. The Fisch – Here is what you get… The Fisch is being faked! If it does not say “The Fisch”, it is not “The Fisch”. The fake Fisch does not have the Fisch logo or the name The Fisch on the front panel of the gauge. The US District Court, Southern District of New York issued an “Order of Final Judgment and Permanent Injunction”, on July 15, 2010, against the counterfeiter. As far as knowing that they were fakes it was easy, they didn’t work. Sometimes these fake Fisch are represented as being genuine Fisch, sometimes in an effort to evade, they are not called the Fisch. Before I got the Fisch (fakers) I just used my scale and caliper. The fakers said my real gold coins were counterfeit. I knew something was wrong and I researched online and found a forum thread dedicated to the fake Fisch. This time I went straight to your site and got wallet #2 and 4. The item “Fisch Fake Coin Detector for the Gold American Eagle” is in sale since Wednesday, December 11, 2019. This item is in the category “Coins & Paper Money\Bullion\Gold\Coins”. The seller is “ken4525″ and is located in Roseville, California. This item can be shipped worldwide.